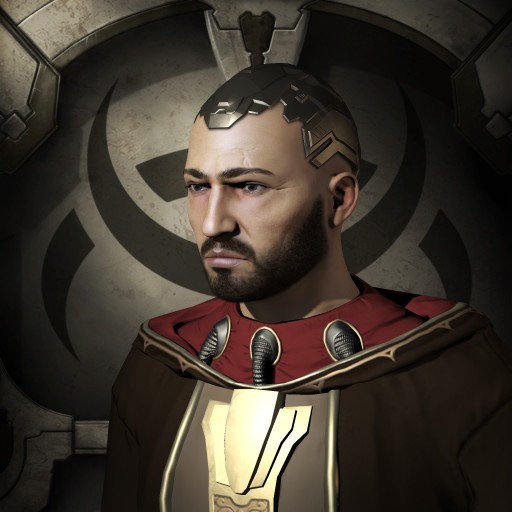 I'm campaigning to represent a wide bloc of players. From roleplay and lore affecionados, all the way to Capital Pilots and nullsec dwellers, I feel I have a broad range of experiance to support and represent all of these potential constituants.

I intend to help CCP keep the game healthy and vibrant, both for the big dogs and the little guys, and especially ensure there's avenues for alternate playstyles.

To that end my main focuses are:

W-Space. I'm not a wormholer currently, but I do want to be a supportive voice for those that do live there.

Any further balance passes on Logistics/Ewar

Promotion of Live Events and Lore, possible outsourcing of more stuff to Player Communities (akin to the Amarr Unity event.)

I've been playing Eve since April of 2013, so just around 2 1/2 years. In that time I've done a lot, and learned plenty about the game and community. I've mined and missioned in hisec, got into PVP after my first experiance of wardec, and been in wormholes, faction warfare lowsec and nullsec.

I've flown for the CFC/Imperium and Provi-Bloc, various smaller outfits in wormholes and for the Amarr Militia, and have experianced a wide range of both PVP and PVE content Eve has to offer.

Alongside my game antics, I am also an active roleplayer, with ties to the Amarr bloc. I have a passion for the lore of this game, and have partaken in both CCP sponsored, and player run, live events. I was also present for the Amarr Unity event in which we got ambushed by Drifters, and flew as a retainer to Laerise for the Amarr Championship.

My primary interests in the game are mid to large combat fleets, Logistics and Carriers. I've extensive experiance Logi anchoring for the corps/alliances I join, as well as a stint for a couple of NPSI fleets run by Sleeper Social Club while I was in 13. I also have plenty of triage experiance, and is one of the thrills I get out of 0.0/W-Space fights.

I'm David Thurlow. I work as a Lead Scaffolder, which means I do a dirty and physical job, so Eve is my release. I don't do corporate meetings, or wear a suit, but my job certainly gives me experiance in dealing with people, especially under pressure. I think my work makes me a "to the point person" but at the same time I know how to do it politely. Work in the Construction Industry in London is not the "lazy" stereotype builder, so it's given me a solid work ethic.

1: New Player recruitment and retention. This has been an ongoing issue for years, and while player communities like Brave/P-Horde/Karma Fleet/Eve Uni have helped over time, CCP must continue to innovate and improve areas of the game. This is more important than ever as the game gets older. If we want the servers to stay on, we need fresh blood coming in and getting excited.

Nullsec. Nullsec is the bread and butter of a large chunk of Eve and its outside press. Most of the big headline articles have been because of fights in nullsec, or started by nullseccers. CCP is showing a commitment to balancing and changing the meta for 0.0 but more work needs to be done to keep this area of space healthy and vibrant.

Complexity and Simplification. CCP have also recently made moves to adjust levels of Complexity. This links back to New Player Retention, but also affects quality of life for all players. It sounds simple, but having Complexity in areas where it makes sense (new fighter mechanics coming in) and simplifying areas where it doesn't (reducing amount of clicks involved in industry) is key to keeping things enjoyable. CCP have made moves towards this, but further work needs to be done.

I have a broad level of experiance in the game, with a wide range of contacts who can feed me concerns as well as advice and ideas.

I still have core interests that I would like to specifically focus on, so while I do have a experiance in lots of things, I can focus on a few primary activities I am strongest in.

I believe I'm a straight forward communicator, willing to listen even if I don't agree, and I feel I'm always approachable by anyone.

Communication between the CSM and the various Devs in CCP has been an issue known about for years. This needs to get fixed once and for all if the CSM is to be of any use going into the future.

Communication from CSM to the playerbase could also always improve. Even if a topic is controversial, CSM reps should be speaking to their constituants as much as possible, even if it's a simple "I can't say because of xyz" or "I'm being honest, I don't have an opinion." Staying engaged and active with the community at large is something every CSM member should be doing, not just the most active ones.

The issue with a single shard game is that there's a real risk of everywhere in the game feeling too much the same. Fortunately, CCP has established diverse areas of space, with their own 'rules', rewards and risks.

Further enhancing that diversity can only be a good thing. When you have a wide range of options open, it allows you to appeal to a greater potential player base. More players in the game means more content for everyone. Keep having plenty of options, including ones for little guys to fight the big dogs, and people will come to the game naturally.

The best way to get to me is via Tweetfleet slack: @utarionzo

If you don't have slack, don't worry, I also accept in game evemails and private conversations.

I also have an email address: utarionzo@gmail.com

Live event, involving DUSTers and Eve players working together again like Caldari Prime. But without the mass dreadnaught spawning shenanigans, let's have a fun battle that'll affect the lore where players really do have the final say with their guns and ships. It'd be a nice farewell to DUST514 till the upcoming PC game comes out.